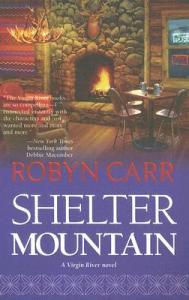 John “Preacher” Middleton is about to close the bar when a young woman and her three-year-old son come in out of the wet October night. A marine who has seen his share of pain, Preacher knows a crisis when he sees one—the woman is covered in bruises. He wants to protect them, and he wants to punish whoever did this to her, but he knows immediately that this inclination to protect is something much more. Paige Lassiter has stirred up emotions in this gentle giant of a man—emotions that he has never allowed himself to feel.

But when Paige’s ex-husband turns up in Virgin River, Preacher knows his own future hangs in the balance. And if there’s one thing the marines’ motto of Semper Fidelis—always faithful—has taught him, it’s that some things are worth fighting for.

SHELTER MOUNTAIN is the second book in the Virgin River series, and it is just as wonderful as the first. I loved getting to know the real Preacher as he helps a young mother on the run from her abusive husband. Paige and Preacher’s relationship develops slowly and realistically given their delicate situation. My heart went out to Paige as she fought to save herself and her son from a monster. Luckily she had Preacher and the rest of Virgin River to offer support and protection.

At first glance, Preacher may not seem like your typical romance hero, but it doesn’t take long to fall in love with him. He’s a huge ex-marine, bald, with dark bushy eyebrows. Along with his intimidating appearance, he’s also very quiet, so getting close to him isn’t easy. But when he does let someone in, he’s the most loyal, protective and kind man on the planet. *swoon*

SHELTER MOUNTAIN also continues the Mel/Jack and Liz/Rick story lines from the first book. I enjoyed revisiting those characters and sharing their joys and heartbreaks – very emotional stuff.