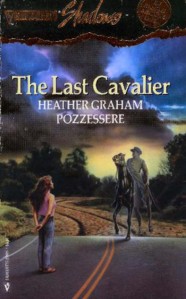 The battle was raging, the air hot with smoke, loud with rifle fire. Then the air turned dim with an eerie mist, and for Jason Tarkenton, captain in the Confederate cavalry, the true nightmare began.

Vickie Knox was today’s woman dressed like yesterday’s, wearing Yankee garb to play a part. But playacting ended when a Reb stepped out of the mist and took her prisoner – for real.

THE LAST CAVALIER was the debut book in Silhouette’s Shadows series, which ran from 1993 to 1996. The series was billed as stories “from the dark side of love” (e.g., Gothics, paranormal romances). Some of the books were reprinted later in the Dreamscapes series.

THE LAST CAVALIER was an interesting twist on time-travel romances. This one takes place on Blackfield’s Mountain in Virginia. In 1862, a Civil War battle is raging on the mountain, and on that same date and location in 1993, a battle reenactment is taking place.

By some twist of fate, a portal opens which brings Jason Tarkenton, a colonel in the Confederate army, into “present day.” He assumes the reenactment is the actual battle, and thinks participant Vickie Knox is a spy for the North. Jason kidnaps Vickie to keep her from turning him over to the Yanks.

Of course, Vickie thinks Jason is a madman who’s taking the battle reenactment way too seriously. And Jason doesn’t believe he’s been transported to 1993. As they work to convince each other their own story is true, sparks fly between them.

For the most part, I liked this book. It was interesting to see Jason’s reaction to Vickie’s modern world. In addition to the developing romance, there was a side story of Jason trying to return to 1862 to save his wounded brother. I thought it was cool how he went about it.

As far as the characters go, I’d say I loved Jason and Vickie’s grandfather “Gramps,” but unfortunately Vickie herself fell a little flat. She was also a bit annoying at times, but Jason made up for it. They did seem well suited for each other in the end, and I loved how their story concluded.

THE LAST CAVALIER was a pretty good start to the Silhouette Shadows series.