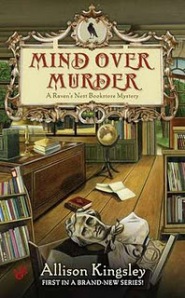 Cousins and best friends, Clara and Stephanie Quinn run The Raven’s Nest Bookstore, where people go to find their most coveted reads. But they have no idea it’s the psychically-gifted Clara who’s reading them…

The bookstore has made an enemy of the town crier, Ana Jordon, who claims that the store’s occult collection is “poisoning” the town’s youth. Meanwhile, the store’s number-one employee, Molly, has made no secret of her anger over Ana’s antics. So when Ana is found dead, killed by the bust of Edgar Allen Poe sculpted by Molly, the evidence is stacked against her. And Clara must rely on her gift to make sense of this senseless murder…

MIND OVER MURDER is the first book in a new cozy mystery series set in the small coastal town of Finn’s Harbor, Maine. Stephanie Quinn Dowd owns the local bookstore. Her cousin Clara Quinn has just moved back to town after living in New York City for many years. Stephanie convinces Clara to help out in the bookstore while she’s getting reestablished in Finn’s Harbor.

The peace and quiet of small town life that Clara was hoping for is very short lived. Ana Jordon, the shop owner next door, is found murdered in The Raven’s Nest Bookstore’s storeroom. Ana was a spiteful person with many enemies, but the prime suspect in the case is Molly, a longtime employee of the bookstore. Ana hated The Raven’s Nest for selling occult books, and she wanted the store shut down. The day before the murder, there were many witnessess to a heated exchange between Molly and Ana, so the police and townspeople are pointing the finger at Molly.

Stephanie is convinced that Molly is innocent, and she wants Clara to prove it with a little help from her special “gift.” Clara has what the family calls the “Quinn Sense,” which is like a strong sixth sense, complete with voices in her mind. Unfortunately for Clara, her gift has always been very unreliable, and she’s tried for a long time to shut it out. Though Clara doesn’t want to get involved in amateur sleuthing, especially if it means using her gift, she just can’t say no her cousin’s plea for help.

There was much that I liked about this book. Clara and Stephanie work in a quaint Edgar Allen Poe-themed bookstore. The story is set in a picturesque coastal town in Maine. The Quinn Sense! I adore cozy mysteries with a touch of the paranormal, and I really liked the sixth sense approach, though it doesn’t overwhelm the story. Another high point was Clara and Stephanie’s relationship. They are cousins and lifelong best friends. I loved the dynamic between them. There’s even a budding romance between Clara and the town’s most sought after single guy.

MIND OVER MURDER is an enjoyable start to The Raven’s Nest Bookstore series. It was well-written with plenty of possible suspects that kept me guessing. I think my only complaint is the way the Quinn cousins trapped the killer at the very end. It was a bit too simple. Yeah, it worked, but it was just too easy! I was expecting something different. Still, I loved the book and devoured it in a few hours. I’m eagerly awaiting the next book in the series!