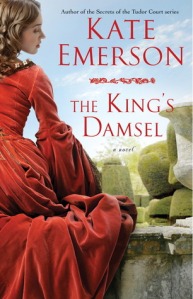 Handmaid. Spy. Mistress. Anxious to secure his own success at the glittering court of Henry VIII, heiress Tamsin Lodge’s ambitious guardian obtains her a position as maid of honor to young Princess Mary Tudor. Tamsin soon comes to love the neglected child, but in the Tudor court, not even a princess is secure. Mary’s father is besotted with the lovely Anne Boleyn, and the girl’s future has grown perilous. Plotting to be Mary’s eyes and ears, Tamsin joins Anne’s service, but the handsome silk worker who is her co-conspirator may be her undoing. While marriage with a merchant is unthinkable, she cannot resist Rafe Pinckney’s embraces. When Tamsin also attracts the lusty Henry, she must choose between loyalty and desire…

With Anne’s jealousy growing dangerous, can Tamsin survive the schemes and seductions that surround her?

This is the fifth book in the Secrets of the Tudor Court series, but it can easily be read stand-alone. The main character is Tamsin Lodge, who is orphaned at 13 years old. Her guardianship is purchased by a slimy individual named Sir Lionel Daggett. Sir Lionel wants to worm his way into the Royal Court, and he tries to use young Tamsin to do so. Against her will, she is sent to be a maid of honor for Princess Mary, though Tamsin quickly becomes loyal to King Henry’s daughter. Tamsin goes to great lengths to protect the princess from the very jealous Anne Boleyn, even joining Anne’s household to spy for Mary.

While many characters in this book are historical figures, Tamsin is a fictional character based on the “king’s damsel” mentioned in an actual letter from the Spanish Ambassador, Eustace Chapuys. I liked Tamsin and her fierce loyalty to Mary. I felt like a lot of this book was Tamsin observing things happening to the other characters, which was what she was supposed to do as a spy. It really wasn’t until the last quarter of the book that Tamsin was in the center of the action.

I wish that Rafe Pinckney’s character and his relationship with Tamsin had been developed more. Rafe needed a bigger presence in the book.

For me, the most memorable character in this book is Princess Mary. This is the first book I’ve read with Mary as a child, and it was interesting to see how her life was as Henry VIII’s daughter and hear her thoughts, especially after Anne Boleyn takes a hold of the king’s attention.

Overall, I thought THE KING’S DAMSEL was an enjoyable read that just wrapped up too quickly. Tudor history buffs should read this book for its portrayal of young Princess Mary.