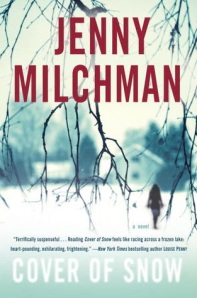 Waking up one wintry morning in her old farmhouse nestled in the Adirondack Mountains of New York, Nora Hamilton instantly knows that something is wrong. When her fog of sleep clears, she finds her world is suddenly, irretrievably shattered: Her husband, Brendan, has committed suicide.

The first few hours following Nora’s devastating discovery pass for her in a blur of numbness and disbelief. Then, a disturbing awareness slowly settles in: Brendan left no note and gave no indication that he was contemplating taking his own life. Why would a rock-solid police officer with unwavering affection for his wife, job, and quaint hometown suddenly choose to end it all? Having spent a lifetime avoiding hard truths, Nora must now start facing them.

Unraveling her late husband’s final days, Nora searches for an explanation—but finds a bewildering resistance from Brendan’s best friend and partner, his fellow police officers, and his brittle mother. It quickly becomes clear to Nora that she is asking questions no one wants to answer. For beneath the soft cover of snow lies a powerful conspiracy that will stop at nothing to keep its presence unknown…and its darkest secrets hidden.

COVER OF SNOW. Wow, what to say about this book? Parts of it, especially early on, were a struggle for me, and I almost gave up a couple of times. However, the puzzling mystery and the uber-creepy atmosphere of the story kept me hanging on, and I’m glad I did.

Nora and her husband Brendan live in an old farmhouse in the remote mountain town of Wedeskyull, NY (pronounced weeds-kill). Brendan is a cop, and Nora restores old homes. Their marriage is a happy one, so Nora is in absolute shock to wake up one morning and discover Brendan had killed himself.

Nora wants answers to why this happened, so she starts asking questions, only to run up against brick walls at every turn. Brendan’s friends and fellow cops, his mother, and others in town seem to be discouraging Nora from discovering the truth any way they can, until she meets an unlikely ally with the keys to unlock Brendan’s past.

So, there were things about this book that troubled me, and most of it occurred in the first half. First, the prose didn’t click with me. Descriptions of relief being like “thick soup” and a trendy coffee shop being like a “prison camp” where just odd to me. I also thought some of the dialogue was awkward. There were conversations that went nowhere, or were a struggle to get out. Finally, I thought some of what went on just wasn’t plausible, especially Nora’s troubling lack of knowledge of her husband’s past. I just didn’t believe it.

But, in spite of the book’s flaws, I would still recommend this book to mystery/suspense fans. Why? Because the mystery itself was just THAT good, and the overall tone of the book was bone-chilling! I haven’t felt such an eerie sense of foreboding while reading a book in a very long time. *shudders* The ending was amazing, so much so that I can forgive what I didn’t like and give COVER OF SNOW 3½-stars.

The audiobook was narrated by Cassandra Campbell, and I loved her performance. Her voice really captured the sadness and desperation of Nora’s character as she searched for answers. I’m very glad I chose to listen to the audio version.