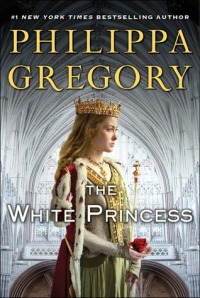 Caught between loyalties, the mother of the Tudors must choose between the red rose and the white.

When Henry Tudor picks up the crown of England from the mud of Bosworth field, he knows he must marry the princess of the enemy house—Elizabeth of York—to unify a country divided by war for nearly two decades.

But his bride is still in love with his slain enemy, Richard III—and her mother and half of England dream of a missing heir, sent into the unknown by the White Queen. While the new monarchy can win power, it cannot win hearts in an England that plots for the triumphant return of the House of York.

Henry’s greatest fear is that somewhere a prince is waiting to invade and reclaim the throne. When a young man who would be king leads his army and invades England, Elizabeth has to choose between the new husband she is coming to love and the boy who claims to be her beloved lost brother: the rose of York come home at last.

I’m reading this wonderful series, The Cousins’ War, out of order, but it’s all good. :-) I’ve read THE LADY OF THE RIVERS, which was Book Three, and now, THE WHITE PRINCESS, Book Five. Philippa Gregory has a knack for blending fact with fiction and bringing historical characters to life, making them real and compelling. Fascinating, all of them, even the ones I wanted to throttle.

A quickie historical note: The White Princess in this book is Elizabeth of York, eldest child of King Edward IV and Elizabeth Woodville. Elizabeth of York was the sister of the Princes in the Tower, the heirs to King Edward IV’s throne after his death. Edward’s brother Richard III had the boys taken to the Tower of London, where they disappeared before the eldest boy could be crowned. Richard III had them declared illegitimate anyway, and took the throne in 1483, the last York king.

THE WHITE PRINCESS begins just after Richard III’s defeat and death at the Battle of Bosworth in 1485. In theory, the War of the Roses came to an end when Henry Tudor took the crown and married Elizabeth, finally uniting the Houses of Lancaster and York. But, of course, it wasn’t that easy!

Poor Elizabeth. She was madly in love with her Uncle Richard, and was devastated by his death. (o.O) Richard III was going to make his beloved niece his queen, but she was forced to marry his archenemy/murderer instead. Elizabeth was a sympathetic character, just trying to make the best out of a situation beyond her control. In the eyes of her husband, she walked a fine line between being a traitorous York and being his repentant queen throughout their entire marriage. Most of the time she was kept in the dark about the scheming of her husband and his mother to secure his crown, and that of her own mother, Elizabeth Woodville, who longed to see a York restored to the throne.

Elizabeth was a strong woman to have survived her life with Henry. I’m sorry to say that Henry was little more than a paranoid mama’s boy, always believing a ghost prince would swoop in a steal his crown. He was so insecure and unlikable, I kind of felt sorry for the man. (Still, I wanted to smack him a few times.) And then there was his mother, Lady Margaret Beaufort, an unpleasant, pious, and power-hungry woman. As his chief adviser and one of the few people the king trusted, she fueled his paranoia and put quite a strain on his relationship with Elizabeth.

I listened to the audio version of this book, and it was amazing. Bianca Amato gave a brilliant performance and truly captured the personalities and emotions of the characters. There was a memorable scene between Elizabeth and her son, Prince Arthur, in church where he tells her that she’ll always have him. Bittersweet. *sniffles*

Now, I have to go back and read some of the earlier books in this series, particularly THE WHITE QUEEN, about Elizabeth Woodville. I need to know more about this fascinating woman.

Disclosure: I received a copy of this audiobook from the publisher in exchange for an honest review.