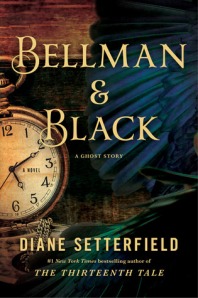 One moment in time can haunt you forever.

Caught up in a moment of boyhood competition, William Bellman recklessly aims his slingshot at a rook resting on a branch, killing the bird instantly. It is a small but cruel act, and is soon forgotten. By the time he is grown, with a wife and children of his own, William seems to have put the whole incident behind him. It was as if he never killed the thing at all. But rooks don’t forget . . .

Years later, when a stranger mysteriously enters William’s life, his fortunes begin to turn—and the terrible and unforeseen consequences of his past indiscretion take root. In a desperate bid to save the only precious thing he has left, he enters into a rather strange bargain, with an even stranger partner. Together, they found a decidedly macabre business.

And Bellman & Black is born.

BELLMAN & BLACK was a curious book, and not at all what I was expecting. It was a haunting tale, but not scary, and not a ghost story in the traditional sense.

This book follows the life of William Bellman, beginning when he kills a rook with his slingshot as a child. Even though he blocks out the memory of that day in his mind, his killing of the bird follows him throughout his life and shapes who he becomes, yet he doesn’t realize it. The book is packed with minute details of Bellman’s life as a successful businessman, and the plot dragged from time to time. What kept me going was the mystery surrounding “Black,” a stranger who continually pops up at the funerals of Bellman’s friends and family.

I thought the author missed a great opportunity with Bellman’s daughter Dora to create a strong female character in the book. I was so intrigued by Dora and her situation that I wished she had a bigger presence. Though, after reading the ending, I can understand why Bellman took center stage.

What did I like? BELLMAN & BLACK contained stunning Gothic imagery. Black. Rook. Cold. Death. Funeral. Mourning. Dark. (This was not a happy tale!) The author’s vivid descriptions of rooks were amazing.

While I enjoyed the first part of the book, in the end I felt like I missed the point. The story was weak, and it lacked the spookiness and suspense that I anticipated. I did enjoy the gorgeous imagery and prose.

I listened to the audiobook performed by Jack Davenport. The narration was well done, and I enjoyed the voices of the secondary characters as well as Bellman.

Disclosure: I received a copy of this audiobook from the publisher in exchange for an honest review.

Please find me around the web via the social buttons above. Happy reading! 📚 — 𝓓𝓲𝓪𝓷𝓪