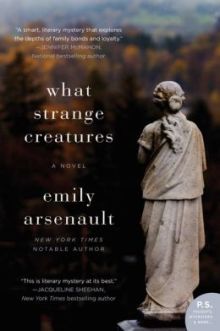 Scandal, love, family, and murder combine in this gripping mystery by critically acclaimed author Emily Arsenault, in which a young woman’s life is turned upside down when her brother is arrested for murder and she must prove his innocence.

The Battle siblings are used to disappointment. Seven years after starting her PhD program—one marriage, one divorce, three cats and a dog later—Theresa Battle still hasn’t finished her dissertation. Instead of a degree, she’s got a houseful of adoring pets and a dead-end copywriting job for a local candle company.

Jeff, her so-called genius older brother, doesn’t have it together, either. Creative and loyal, he’s also aimless, in both work and love. But his new girlfriend, Kim, a pretty waitress in her twenties, appears smitten. When Theresa agrees to dog-sit Kim’s puggle for a weekend, she has no idea it will be the beginning of a terrifying nightmare that will shatter her quiet academic world.

Soon Kim’s body is found in the woods, and Jeff becomes the prime suspect.
Though the evidence is overwhelming, Theresa knows that her brother is not a murderer. As she investigates Kim’s past, she uncovers a treacherous secret involving politics, murder, and scandal—and becomes entangled in a potentially dangerous romance. But the deeper she falls into this troubling case, the more it becomes clear that, in trying to save her brother’s life, she may be sacrificing her own.

WHAT STRANGE CREATURES is an entertaining, well-crafted mystery that had me hooked from the beginning. Theresa is a divorced 35-year old who adopts a pet after every failed relationship – she’s up to four now. She works an unfulfilling job writing descriptions of scented candles, and in her spare time she struggles with her never ending dissertation on Margery Kempe, a medieval Christian mystic.

Theresa’s ordinary life is shaken up when her brother Jeff is arrested for murdering his girlfriend, a young waitress named Kim. Desperately wanting to believe that Jeff is innocent despite the incriminating evidence against him, Theresa starts investigating Kim’s recent activities and is surprised by what she discovers. Theresa finds herself in a multi-layered mystery involving political scandals and older murder cases dating back to the early 90s. I enjoyed trying to fit the pieces of the puzzle together, and there were some nice twists along the way. I did have an inkling about who the culprit was, but what stumped me most was the “why.”

This is the first book by Emily Arsenault I’ve read, and I enjoyed her engaging writing-style and quirky, yet realistic, characters. Theresa is witty, snarky, and easily relatable, and many of her observations had me snickering. I especially loved how she threw in anecdotes from Margery Kempe’s eccentric life – both strange and funny. The animals in this book were a hoot too, especially the “puggle” called Wayne.

WHAT STRANGE CREATURES was an exciting murder mystery with plenty of humor mixed in.

Disclosure: I received a copy of this book from the publisher through Edelweiss in exchange for an honest review. I am participating in the author’s blog tour, organized by TLC Book Tours.

Emily Arsenault is the critically acclaimed author of The Broken Teaglass, a New York Times Notable Mystery, and In Search of the Rose Notes. She lives in Shelburne Falls, Massachusetts, with her husband and daughter.

☔️ Had a fun rainy Sunday afternoon hanging out with my sister. We went to @thegreendoorstoreks where I bought Withering-by-Sea (couldn’t resist the title) and a candle. The candle is made by @unwinedcandles and smells amazing — cypress & orange peel. Ate lunch at Jalapeños too!
🐾♥️ Happy National Chihuahua Day!
😱 Chilling! THE RESTING PLACE by Camilla Sten is creepy-good quiet horror. I enjoyed the cold, atmospheric setting of the isolated estate that the protagonist inherits. What disturbing family secrets are buried there? The twists were delicious and disturbing! Borrowed from the library.
🌝 THE NIGHT SHIFT by Alex Finlay is a twisty, suspenseful crime novel that hooked me from the start. I enjoyed trying to figure out how the past and present murders tied together. This was one of those books that I couldn't wait to get back to reading when real life forced me to put it down! Borrowed from the library.