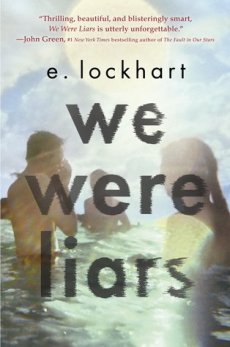 A beautiful and distinguished family.
A private island.
A brilliant, damaged girl; a passionate, political boy.
A group of four friends—the Liars—whose friendship turns destructive.
A revolution. An accident. A secret.
Lies upon lies.
True love.
The truth.

Read it.
And if anyone asks you how it ends, just LIE.

WE WERE LIARS is another one of those books where saying much about the plot would give away spoilers. What to say? Well, the story is told from the point of view of Cadence, a teenage girl who spends summers with her family on their private island. Cadence, her two cousins, and a friend, make up a close knit group known as the Liars. During the summer of her 15th year, she’s in an accident that wipes her memory of that time. Her family is secretive about what actually happened to her, so two years later she returns to the island to find answers.

I’m not a big YA reader, so I was surprised at how much I enjoyed this book. The writing was lovely, and I can only say that I was consumed by the story. WE WERE LIARS is a quick read, but not one that’s easily forgotten. And the ending! Left me with a sick feeling. It’s definitely a book that will haunt my thoughts long after finishing.

✨ Happy Publication Day ✨
Ginger has been struggling with neck & back pain the past couple of weeks. She’s doing okay on pain meds, but we’ve been referred to a doggy neurologist for further treatment. She’s getting lots of pampering for now! Please send her healing wishes! 💕
❄️ Thanks to Park Row Books & NetGalley, my #firstbookoftheyear is THE OVERNIGHT GUEST by Heather Gudenkauf. This one kept me reading until the wee hours because it’s SO good! 🤩 Nerve-racking, too!! 😬 Comes out January 25th.
2️⃣0️⃣2️⃣1️⃣ — Top Nine — My most “liked” posts of the year!