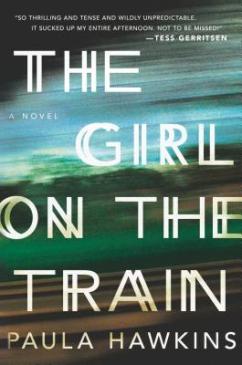 Rachel takes the same commuter train every morning. Every day she rattles down the track, flashes past a stretch of cozy suburban homes, and stops at the signal that allows her to daily watch the same couple breakfasting on their deck. She’s even started to feel like she knows them. “Jess and Jason,” she calls them. Their life—as she sees it—is perfect. Not unlike the life she recently lost.

And then she sees something shocking. It’s only a minute until the train moves on, but it’s enough. Now everything’s changed. Unable to keep it to herself, Rachel offers what she knows to the police, and becomes inextricably entwined in what happens next, as well as in the lives of everyone involved. Has she done more harm than good?

There’s lot of buzz going around about THE GIRL ON THE TRAIN, and for the most part, I think it lived up to the hype. It’s a dark psychological thriller that was easy to get wrapped up in. Rachel, a.k.a the girl on the train, likes to snoop on people’s lives outside the window as she rides back and forth to London, which gets her in a web of trouble when she sees something disturbing. Rachel is unstable, and her life is a mess, so can her story be believed? The doubts I had about Rachel made this an entertaining story to read. I love unreliable narrators — fun and frustrating.

If I compare this book to that other “girl” thriller (GONE GIRL), it falls a bit short. THE GIRL ON THE TRAIN had plenty of interesting twists and big reveals along the way, though I wasn’t that surprised by the ending. I also thought that the women in this book were just too weak in character, as in a wee bit pathetic? Overall, I did enjoy the book though!! Kept me reading late into the night… Impressive debut, and I’ll definitely pick up Paula Hawkins next novel. 4 stars!