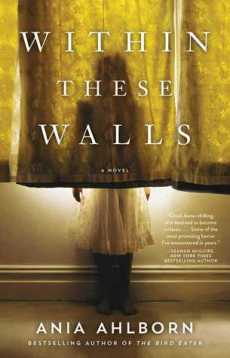 In her all-new supernatural thriller, bestselling indie horror author Ania Ahlborn asks: How far would you go for success? What would you be capable of if the promise of forever was real?

With his marriage on the rocks and his life in shambles, washed-up true-crime writer Lucas Graham is desperate for a comeback, one more shot at the bestselling success he once enjoyed. His chance comes when he’s promised exclusive access to death row inmate Jeffrey Halcomb, the notorious cult leader and mass murderer who’s ready to break his silence after thirty years, and who contacted Lucas personally from his maximum-security cell. With nothing left to lose, Lucas leaves New York to live and work from the scene of the crime: a split-level farmhouse on a gray-sanded beach in Washington State whose foundation is steeped in the blood of Halcomb’s diviners—runaways who were drawn to his message of family, unity, and unconditional love. There, Lucas sets out to capture the real story of the departed faithful. Except that he’s not alone. For Jeffrey Halcomb promised his devout eternal life…and within these walls, they’re far from dead.

This book’s creepy cover drew me in, but it was the author’s engaging writing style that had me hooked. Right away, I felt like I knew these characters and was invested in their story. WITHIN THESE WALLS had the right amount of spooky that had me looking over my shoulder a few times. There were a few gory details, but nothing too over the top.

Something that worked very well for this book was the dual-time period element. In the present, we have Lucas Graham, a down-on-his-luck true crime writer who’s been given the chance to revamp his career by being granted an interview with convicted killer Jeffrey Halcomb. Jeffrey’s story, along with his deranged “family,” is told 30 years in the past. I enjoyed seeing how the two parts came together, and the ending really surprised me.

I listened to a big chunk of this book on audio (thanks, library!). R. C. Bray was fantastic as the narrator. He made a convincing desperate crime writer. He did well with the other characters’ voices too.

💀🍂 We woke up to temps in the 50s & sunshine — perfect weather for the last day of summer.
🧤MRS. MARCH | Virginia Feito
🔮 New pillow from Michael’s! I love their Halloween merch this year. Lots of skeletons & fortune telling. Ginger likes.
🔪NOT A HAPPY FAMILY | Shari Lapena🔪 One-Sentence Summary: When a wealthy couple is murdered, fingers point to their adult children who stand to inherit millions.