Peril On the Screen: “This is for those of us that like to watch suitably scary, eerie, mysterious Gothic fare during this time of year. It may be something on the small screen or large. It might be a television show, like Dark Shadows or Midsomer Murders, or your favorite film.” ~ The Estella Society

Happy Halloween! For the “Screen” part of the R.I.P. challenge, I watched four movie versions of Wuthering Heights. Yep, four, from 1939, 1992, 2009, and 2011. Luckily the library had a copy of each one. Wuthering Heights is one of my favorite classics, but I’d never seen a movie adaptation of it. Here’s how they stacked up:

Despite the over-dramatic acting popular at the time, the 1939 version was good. Definitely full of passion! It was odd that the costumes were reminiscent of the U.S. Civil War era, instead of when the story takes place, English Moors, late 1700s. I guess that was due to the popularity of the Gone With the Wind movie, which came out about the same time.

The 1992 version was okay, though unfortunately not too memorable. I never quite bought the relationship between Catherine and Heathcliff in this one, plus it’s hard to accept Ralph Fiennes as a dark and brooding anti-hero. Should I nitpick some more? Why not! Juliette Binoche’s French accent kept slipping in — not suitable for Cathy of the Moors!! I did like that they included the second generation of Earnshaw-Linton-Heathcliffs, which the 1939 version left out. 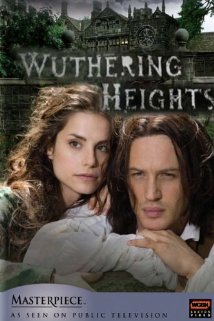 The 2009 version is by far my favorite. Loved this one so much!! The entire cast was perfect for the role they played. Lots of angst, passion, cruelty, yet they never stepped over the melodrama line. I liked how Nelly Dean (Earnshaw servant/Catherine’s caretaker) played such a big role, which goes along with the book. Tom Hardy, yep, he is the Heathcliff that I picture in my mind.

I hate to give it a failing grade, but I have no choice! I watched about an hour and had to give up. I never made it past Heathcliff and Cathy as children. They completely forgot the dialogue. Painful and awkward. Maybe it got better, though I’ll never know…

So that’s my Wuthering Heights movie wrap-up. Let me know if there are other versions I should check out! Here are the books I finished reading for the R.I.P Challenge:

Welcome! I’m a Gen X book blogger reading a little bit of everything — adult, YA, and middle grade.

🔮 New pillow from Michael’s! I love their Halloween merch this year. Lots of skeletons & fortune telling. Ginger likes.
🔪NOT A HAPPY FAMILY | Shari Lapena🔪 One-Sentence Summary: When a wealthy couple is murdered, fingers point to their adult children who stand to inherit millions.
🌲COME WITH ME | Ronald Malfi🌲 One-Sentence Summary: After his wife Allison is killed, Aaron Decker gradually uncovers her dark, hidden life with some otherworldly assistance.
✨THE GUILT TRIP | Sandie Jones ✨ One-Sentence Summary: A lush destination wedding in Portugal threatens to turn disastrous for three couples who fail to keep their secrets buried.