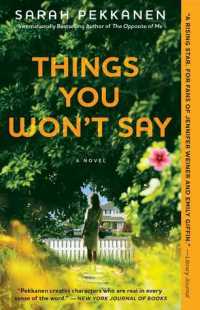 In this timely and provocative novel, internationally bestselling author Sarah Pekkanen takes us inside a family in crisis and a marriage on the brink after a tragic shooting.

How far would you go to save your family?

Every morning, as her husband Mike straps on his SIG Sauer and pulls on his heavy Magnum boots, Jamie Anderson tenses up. Then comes the call she has always dreaded: There’s been a shooting at police headquarters. Mike isn’t hurt, but his long-time partner is grievously injured. As weeks pass and her husband’s insomnia and disconnectedness mount, Jamie realizes he is an invisible casualty of the attack. Then the phone rings again. Another shooting but this time Mike has pulled the trigger.

But the shooting does more than just alter Jamie’s world. It’s about to change everything for two other women. Christie Simmons, Mike’s flamboyant ex, sees the tragedy as an opportunity for a second chance with Mike. And Jamie’s younger sister, Lou, must face her own losses to help the big sister who raised her. As the press descends and public cries of police brutality swell, Jamie tries desperately to hold together her family, no matter what it takes.

In her characteristic exploration of true-to-life relationships, Sarah Pekkanen has written a complex, compelling, and openhearted novel her best yet.

I chose this book to read because I enjoyed Pekkanen’s previous novel, SKIPPING A BEAT. I didn’t like THINGS YOU WON’T SAY as much, but it was a worthwhile read nonetheless. The author tackles the subject of police brutality and racial tension, and her novel at least covers part of the controversial situation in a sensitive way.

The novel starts off strong with Mike’s tragedies at work and the burden it puts on Jamie and their children. It seemed to lose focus though, with the introduction of Christie (Mike’s ex) and Lou (Jamie’s sister). Their side stories didn’t do anything to advance the plot, and Lou’s, unfortunately, was boring.

I liked how the book wraps up, though it was probably too neat and tidy to be realistic, especially with recent real life events similar to this one. What I liked most was watching how Jamie and Mike’s relationship changed over the course of the terrible ordeal, and what they learned from their mistakes.

Disclosure: I received a copy of this book from the publisher thorough NetGalley in exchange for an honest review.