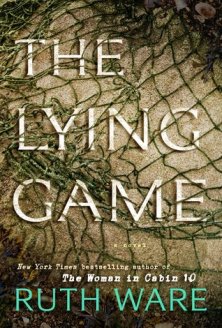 On a cool June morning, a woman is walking her dog in the idyllic coastal village of Salten along a tidal estuary known as the Reach. Before she can stop him, the dog charges into the water to retrieve what first appears to be a wayward stick, but to her horror, turns out to be something much more sinister…

The next morning, three women in and around London—Fatima, Thea, and Isabel—receive the text they had always hoped would NEVER come, from the fourth in their formerly inseparable clique, Kate, that says only, “I need you.”

The four girls were best friends at Salten, a second rate boarding school set near the cliffs of the English Channel. Each different in their own way, the four became inseparable and were notorious for playing the Lying Game, telling lies at every turn to both fellow boarders and faculty, with varying states of serious and flippant nature that were disturbing enough to ensure that everyone steered clear of them. The myriad and complicated rules of the game are strict: no lying to each other—ever. Bail on the lie when it becomes clear it is about to be found out. But their little game had consequences, and the girls were all expelled in their final year of school under mysterious circumstances surrounding the death of the school’s eccentric art teacher, Ambrose (who also happens to be Kate’s father).

Atmospheric, twisty, and with just the right amount of chill that will keep you wrong-footed—which has now become Ruth Ware’s signature style—The Lying Game is sure to be her next big bestseller. Another unputdownable thriller from the Agatha Christie of our time.

THE LYING GAME is told from the perspective of Isa Wilde, a 30-something Londoner and mother of a baby girl. Isa befriended Kate, Fatima, and Thea as a teen when they attended Salten House, a boarding school in a small coastal English town. The foursome had a “lying game” they liked to play, which of course earned them the reputation of being cruel liars. After tragedy strikes and they’re faced with a scandal at school, the girls leave Salten House and go separate ways, but the stress of what happened there will continue to haunt them. Fast forward 17 years, and the four women must return to Salten to face the lies of their past.

I have mixed feelings about this book. Ruth Ware is one of my favorite authors, but I don’t think this book had the best build up of tension. Lots of drama though! I was very curious about the mystery that the women were hiding, but I felt like the plot was a bit too slow moving. I think I would have preferred hearing other characters’ POVs instead of just staying in Isa’s head. I did love the creepy atmosphere of the setting. Kate’s home is a tumbledown mill right on the water. A solid mystery, though I was hoping for more suspense, less drama.

One thought on “Quick Thoughts: THE LYING GAME by Ruth Ware”