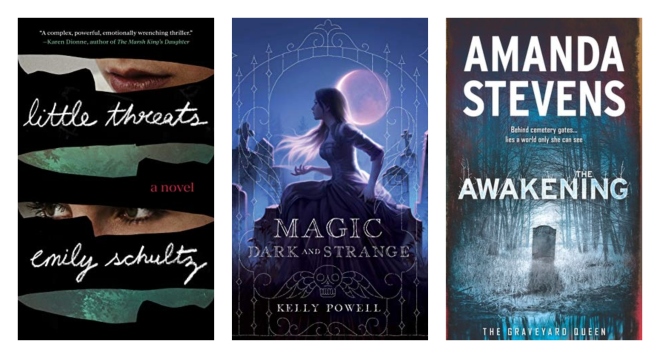 Little Threats by Emily Schultz *
My rating: 3 of 5 stars

In 1993, teenage twin sisters Carter and Kennedy Wynn rebel against their suburban upbringing with grunge, drugs, and dangerous guys. The night after a bad acid trip, their best friend Haley is murdered and Kennedy takes the blame, and she spends 15 years in prison wondering what really happened. In 2008, Kennedy is finally free to start her life, but soon true-crime tv show host Dee Nash comes to town intent on stirring up the past.

While it is part mystery, LITTLE THREATS is mostly a slow-burn family drama about the repercussions of a young girl’s murder. The characters were difficult to like, though I thought their dilemmas were compelling. Kennedy’s conviction at 16 was a stretch. Motive is important, and to me there wasn’t one. She ends up accepting the charges against her though maintaining her innocence because she blacked out and couldn’t remember what actually happened. What lazy police work. The victim’s younger brother and Dee Nash investigate further and open a nasty can of worms. I wasn’t surprised by how things turned out, though I found it intriguing, and rather depressing.

The best part of the book was the early 90s nostalgia — grunge music, doc martens with floral peasant dresses, Kurt Cobain — this story brings it all back. Fun to revisit, though so glad I didn’t go through it with this disturbing crew.

* I received a review copy of this book from the publisher in exchange for an honest review.

Magic Dark and Strange by Kelly Powell
My rating: 3 of 5 stars

MAGIC DARK AND STRANGE is a YA historical fantasy set in the Victorian-like city of Invercarn. The main character is 17-year old Catherine Daly who works at a print shop by day, and by night she raises the dead for grieving families who just want a few more moments with their departed loved ones — for a price. She and Guy Nolan, a watchmaker’s son, end up entangled in a mystery involving a charmed timepiece said to be buried in an unmarked grave. Catherine’s boss wants her to retrieve this item at any cost, but she and Guy get more than they bargained for when the coffin is opened.

There was much to enjoy in this Gothic mystery — dark atmosphere, creepy cemeteries, slow-burn romance, clever characters, and a Victorian setting. I was disappointed, though, with the lack of world-building. All of this amazing magic, and no explanation of where it comes from and how it works. Why is Catherine magical? Has she always been that way? It almost felt like this was book two of a series. Some backstory was missing. MAGIC DARK AND STRANGE had a lot of potential, but it needed to be fleshed out more.

The Awakening by Amanda Stevens *
My rating: 4 of 5 stars

Reading THE AWAKENING was bittersweet, as it’s the conclusion to one of my favorite series. I didn’t want it to end! Known as the Graveyard Queen, protagonist Amelia Gray has made a successful career restoring dilapidated and often forgotten cemeteries. She’s also gifted with being able to see and communicate with ghosts. Her latest job restoring Woodbine Cemetery brings her face to face with the malevolent spirit of a young girl. She seems to be fixated on an unnamed baby’s grave, and it’s up to Amelia to figure out the connection between them and what will finally allow the child to rest in peace.

A lot more juicy secrets are revealed in this book, and Amelia’s turbulent on-again, off-again relationship with John Devlin comes to a head. Though I was sad to see the story end, I was pleased with the way the author wrapped things up. Emotional! I highly recommend the Graveyard Queen series to fans of Gothic suspense and creepy ghost stories, just start at the beginning with The Restorer (#1) or The Abandoned (#0.5).

* I received a copy of this book from the publisher through NetGalley in exchange for an honest review.

One thought on “Thoughts on Books (#21): LITTLE THREATS • MAGIC DARK AND STRANGE • THE AWAKENING”

Hello! My name is Diana, and I have been blogging about books since 2010. Fiction is my favorite genre, and I especially enjoy reading suspense/thrillers, mysteries, historical fiction, women’s fiction, and Gothic novels.

Please find me around the web via the social buttons above. Happy reading! 📚