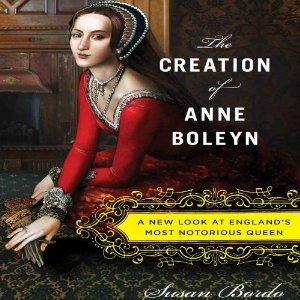 Part biography, part cultural history, The Creation of Anne Boleyn is a fascinating reconstruction of Anne’s life and an illuminating look at her afterlife in the popular imagination. Why is Anne so compelling? Why has she inspired such extreme reactions? What did she really look like? Was she the flaxen-haired martyr of Romantic paintings or the raven-haired seductress of twenty-first-century portrayals? (Answer: Neither.) And perhaps the most provocative questions concern Anne’s death more than her life. How could Henry order the execution of a once beloved wife? Drawing on scholarship and critical analysis, Bordo probes the complexities of one of history’s most infamous relationships.

Bordo also shows how generations of polemicists, biographers, novelists, and filmmakers imagined and re-imagined Anne: Whore, martyr, cautionary tale, proto “mean girl,” feminist icon, and everything in between. In this lively audiobook, Bordo steps off the well-trodden paths of Tudoriana to expertly tease out the human being behind the competing mythologies.

After Anne Boleyn was executed in 1556, King Henry VIII tried to erase her from history by destroying her portraits, letters, and any other traces of her existance. Because of this, the real Anne Boleyn remains a mystery. Was she a wicked harlot or a Protestant martyr? A conniving husband-stealing shrew or feminist champion? In THE CREATION OF ANNE BOLEYN, author Susan Bordo sets out to “save” Anne the human being from the various myths created over the centuries.

The first half of the book was my favorite. It’s an in depth look at Anne’s relationship with Henry, and how certain people from her own time viewed her and her marriage with the king. It was interesting to hear the author’s opinions of Catherine of Aragon and Jane Seymour, and how they differed from Anne. Ms. Bordo also looks at the theories about Henry’s health that may have caused his fickle nature when it came to disposing of his wives.

I didn’t care for the second half of the book quite as much. It explored how different versions of Anne Boleyn have been created over the last 500 years to fit the standards of the time. The chapters dragged at times, and ideas were repeated. I did like that the author showed how Anne is portrayed in film and literature today, including her thoughts on The Tudors television show. One negative for me was her obvious dislike of Philippa Gregory’s The Other Boleyn Girl (both the book and movie). It’s fine if she doesn’t like Gregory’s portrayal of Anne, but hearing about it over and over got tiresome after a while. (I have not read or seen The Other Boleyn Girl, but now I want to!)

This book was narrated by Barbara Rosenblat, and she gave a brilliant performance. She added just the right amount of enthusiasm, humor, and sarcasm in her voice at the appropriate passages. I would give the narration alone 5 stars!

THE CREATION OF ANNE BOLEYN was expertly researched, and I enjoyed how it was so much more than a typical biography. The information presented was certainly thought-provoking, and I walked away from this book with a new view of England’s most notorious queen.

Disclosure: A copy of this book was provided by Audible.com in exchange for an honest review. 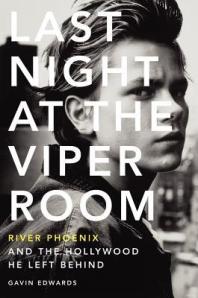 Hollywood was built on beautiful and complicated matinee idols: James Dean and Marlon Brando are classic examples, but in the 1990s, the actor who embodied that archetype was River Phoenix. As the brightly colored 1980s wound down, a new crew of leading men began to appear on movie screens. Hailed for their acting prowess and admired for choosing meaty roles, actors such as Johnny Depp, Nicolas Cage, Keanu Reeves, and Brad Pitt were soon rocketing toward stardom while an unknown Leonardo DiCaprio prepared to make his acting debut. River Phoenix, however, stood in front of the pack. Blessed with natural talent and fueled by integrity, Phoenix was admired by his peers and adored by his fans. More than just a pinup on teenage girls’ walls, Phoenix was also a fervent defender of the environment and a vocal proponent of a vegan lifestyle—well on his way to becoming a symbol of his generation. At age 18, he received his first Oscar nomination. But behind his beautiful public face, there was a young man who had been raised in a cult by nonconformist parents, who was burdened with supporting his family from a young age, and who eventually succumbed to addiction, escaping into a maelstrom of drink and drugs.

And then he was gone. After a dozen films, including Stand by Me and My Own Private Idaho, and with a seemingly limitless future, River Phoenix died of a drug overdose. He was 23 years old.

I enjoyed listening to this biography of River Phoenix. I was in the mood for something different, and LAST NIGHT AT THE VIPER ROOM fit the bill perfectly. This book was released just a few days shy of the 20th anniversary of his death. A night out at a club. Drugs. A bad decision. A promising young actor dead at age 23.

This was more than just a recap of what happened on October 31, 1993. It spans River’s life from his unconventional childhood in South America (his hippie parents were members of a cult) to his rise to stardom and beyond. Learning about what went on during River’s childhood was surprising. I can see how his experiences shaped the troubled young man he became. The book also talks a lot about “Young Hollywood” at the time, which included Johnny Depp, Leonardo DiCaprio, Keanu Reeves, and Winona Ryder. Hearing about what the other actors were doing helped put River’s career in perspective.

The audiobook was performed by Luke Daniels, and overall I was pleased with his narration. He had a strong, interesting voice and good pacing. When quoting people he would change his voice, and most of his impressions were spot on (at least for the people I’m familiar with).

LAST NIGHT AT THE VIPER ROOM is a well-written story of a life cut short. It didn’t glamorize drug abuse at all – it told it like it was. Sad. The author also poses “what if” questions and the possible answers which were very interesting to think about. This book might appeal to film buffs and and fans of Gen X biographies.

Hello! I’m a Gen X book blogger & bookstagrammer reading a little bit of everything — adult, YA, and middle grade.

I’ve been blogging about books since 2010. I’m a Goodreads & NetGalley addict, and a collector of vintage gothic paperbacks. I love rainy days, abandoned places, and Halloween. 🎃

📻 Tell Me Something Tuesday: What’s your favorite form of media (apart from literature, that is)?
❓EVERYTHING YOU WANTED TO KNOW ABOUT INDIANS BUT WERE AFRAID TO ASK — “Why are Indians so often imagined rather than understood?" Ojibwe author and professor Dr. Anton Treuer tackles this question and dozens more in this engaging and informative book, perfect for young readers and adults alike. I learned so much from this book, including Indigenous history and the lives of Natives today. The Q&A format makes the information easily accessible, while the author's personal writing style will keep readers interested.
🤨 The premise of SHUTTER held so much potential, but overall this book was a miss for me. The story follows Betty Roux, a young woman who moves across the country to New York, trying to escape the grief of losing her father. Betty's dream is to be an actress, and a childhood friend hooks her up with a hot director who's filming an homage (of sorts) to Cape Fear on a private island off the coast of Maine.
✨”Ivy Mae Bloom is almost thirteen years old, her name is almost a complete sentence, and her family’s RV is almost a home."✨