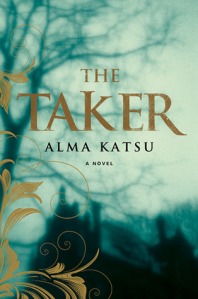 On the midnight shift at a hospital in rural Maine, Dr. Luke Findley is expecting another quiet evening of frostbite and the occasional domestic dispute. But the minute Lanore McIlvrae—Lanny—walks into his ER, she changes his life forever. A mysterious woman with a past and plenty of dark secrets, Lanny is unlike anyone Luke has ever met. He is inexplicably drawn to her . . . despite the fact that she is a murder suspect with a police escort. And as she begins to tell her story, a story of enduring love and consummate betrayal that transcends time and mortality, Luke finds himself utterly captivated.

Her impassioned account begins at the turn of the nineteenth century in the same small town of St. Andrew, Maine, back when it was a Puritan settlement. Consumed as a child by her love for the son of the town’s founder, Lanny will do anything to be with him forever. But the price she pays is steep—an immortal bond that chains her to a terrible fate for all eternity. And now, two centuries later, the key to her healing and her salvation lies with Dr. Luke Findley.

Part historical novel, part supernatural page-turner, The Taker is an unforgettable tale about the power of unrequited love not only to elevate and sustain, but also to blind and ultimately destroy, and how each of us is responsible for finding our own path to redemption.

Is it possible to become completely absorbed in a book and find all of the characters reprehensible in some way? The answer is yes. The Taker is a beautifully written, mesmerizing tale, but the characters! They are so terribly flawed, but I could not look away. It’s the kind of book that leaves you wondering who the real villain was. The Taker is actually stories within a story, from the past and the present, effortlessly woven together.

The story begins as a suspected murderer is brought into the emergency room of a rural Maine hospital to be examined. The present day part of the book is told in third person, but in the present tense, which I though gave the story an eerie feel. At first I thought the present tense felt awkward, but it really worked well with the tone of the story. Luke Findley, the doctor on call, suspects something is amiss with his mysterious patient, other than the fact she claims to have just stabbed a man to death. The woman, Lanny, tries to convince Luke to help her escape. She begins to tell Luke her sorrowful story that began 200 years ago.

Lanny’s tale of her past is told in first person. Lanny grew up in a Puritan family in the Maine Territory at the beginning of the 19th century. As a young teen, she became infatuated with Jonathan, the most beautiful and unattainable boy in their village. He was from a wealthy family and the son of the town’s founder. He used his beauty and charm to seduce any willing woman in the village, married or not. Lanny’s love for Jonathan became an obsession. She was selfish and jealous, willing to do anything to possess him.

Completely fascinated by this strange woman’s tale, Luke decides to help Lanny escape from the hospital. While on the run, she continues with her story. She tells him how her indiscretions with Jonathan result in her being sent to Boston; how she falls prey to a wicked Romanian count called Adair; and how Adair uses magic to make her immortal. And through it all, her obsessive love for Jonathan never wanes. Lanny tells Luke just how far she was willing to go have Jonathan as her own – forever.

The historical detail was so rich. My favorite part of the story was when Lanny and Jonathan were in their rural town of St. Andrews in the early 1800s. I actually became a bit detached from the story after Lanny arrived in Boston because I loved the other part so much.

The Taker is a dark, gothic tale of obsession, betrayal, sex, and debauchery. It was most definitely gripping, the type of story that will stay with you after you’ve read it. I’ve read that The Taker is the first book of a planned trilogy, and I so hope that’s true. There are still important questions that need answers. Lanny’s tale is far from over.

My name is Diana, and I’ve been blogging about books since 2010. Fiction is my favorite genre, and I especially enjoy reading suspense/thrillers, mysteries, historical fiction, women’s fiction, and Gothic novels.

My review, disclosure, and privacy policies may be found using the top menu tabs.

Please find me around the web via the social buttons above.