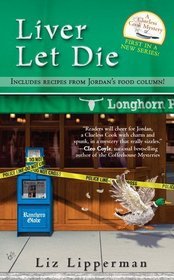 Jordan McAllister dreams of becoming a popular sports columnist but gets stuck in a po-dunk town writing personal ads for a small time newspaper. When she’s offered a chance to fill in for a local food critic off on sick leave, she jumps at the chance rationalizing that it’s one step closer to her dream. However, when a dead body is found underneath her apartment stairwell with her name and number along with it, she becomes the prime suspect, as well as the main course on the murder menu.

I think it was the clever title that first drew me to this book. “Liver Let Die: A Clueless Cook Mystery” fit the story perfectly. The clueless cook in question is Jordan McAllister. Her ambition in life is to be a big time sports reporter, but instead she’s stuck doing the personal ads for a small town newspaper. When the paper’s food critic takes a leave of absence, Jordan’s boss insists that she take over the weekly Kitchen Kupboard column. There are only two problems: Jordan can’t cook, and she knows nothing about gourmet food.

Jordan’s first assignment is to review a new steak house in town. Oh no! Up pops another problem: She doesn’t eat beef. Her waiter, J.T., suggests she order the very expensive foie gras. Of course, Jordan is clueless as to what it actually is, and after taking a tiny nibble, she ends up hiding the rest of it in her purse. Ruining the purse wasn’t the worst thing about the dinner; later on, her waiter is found stabbed to death outside of her apartment. Because J.T. was on his way to visit her, the police suspect she is the murderer.

Overall, I thought LIVER LET DIE was a fun read and well constructed cozy mystery. There were two stories going on that were loosely intertwined, and you don’t find out until the end which one J.T.’s death fit into. This book was full of colorful characters, humorous moments and witty dialogue. One thing that had me giggling was how Jordan would take her friends’ common recipes and make them “gourmet” for her column by giving the dishes foreign names. For the most part, Jordan was a very likable, down-to-earth “every woman,” but she did have a couple TSTL moments. Though, it was funny because she pointed out her stupid moments as they were happening. There’s also a budding romance between Jordan and the mysterious Alex Montgomery, someone she’s not quite sure she can trust.

The book includes several recipes that were mentioned in the story. I especially want to try the Budin de Papitas Fritas con Pollo.

JUNE READING WRAP-UP
What a sweet (and bittersweet) story! I'm usually a hard sell when it comes to rom-coms, but this one I could not resist, with a ghostwriter haunted by her handsome editor's ghost, and a quirky small town funeral parlor setting. I wasn't sure how a phantom love interest would work, but it did.
After reading the blurb, I wasn't exactly sure what to expect from this book, but I ended up enjoying it quite a bit. It tells the story of the Cleo Ray murder trial, with Cleo being a popular fitness "influencer" on social media accused of killing her girlfriend.
THE FAVOR by Nora Murphy is an unsettling domestic suspense novel involving two affluent, professional women who are victims of spousal abuse. They don't know each other, but when Leah observes McKenna from afar in her same perilous situation, she intervenes.
That ending...WHAT?!? I had to go over the last couple of pages again just to make sure I read everything right. Ugh! It was so twisted, but I loved it.
📚 Coffee & recent library haul:

The header paintings by John William Waterhouse featured on my blog are in the public domain.