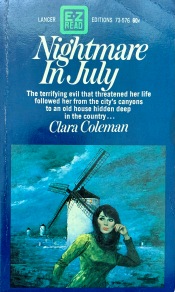 “The first time she met him, Amanda Swanson recognized the mark of evil deep in the stranger’s cold blue eyes. He terrified her even though she couldn’t name the secret he threatened her with. Yet her husband, knowing it, condemned her to spend the summer alone with him — and the legacy of violence he carried with him.”

Amanda Swanson’s husband Paul owns a publishing company. She was an editor there at one time, but quit working after they got married, feeling it wasn’t right to work at the same company or at a competing publisher. I was never convinced she was happy about the situation, but suddenly her life was dedicated to supporting Paul’s publishing ambitions. If only he were worthy of her loyalty!

Paul is ecstatic when he receives an incomplete manuscript in the mail that he believes will be a huge success. Paul invites this once-in-a-lifetime literary talent to finish his book at their secluded country home where they spend weekends.

When Amanda first meets Jordan Youngfield, she senses that something is off about the young author. Things get worse when Paul insists that she stay with Jordan in the country for the summer while he works in the city. Jordan’s behavior becomes more threatening, and Amanda fears for her safety, but Paul only cares about getting that finished manuscript…

“The last thing I did that night before I fell asleep was remind myself that danger surrounded me — that the Mill was a place of terror that July.”

Overall this was a suspenseful and enjoyable quick read. Jordan’s character needed more fleshing out, but he did come across as creepy. I felt bad for Amanda having to be second to Paul’s publishing company, plus he was a condescending jerk. The ending was good. Not a big surprise, but satisfying. — 𝓓𝓲𝓪𝓷𝓪

Oh, Jane Corby! Just ever so slightly too dumb to live. It’s 1867, and Jane, a young New York City librarian, is hired to catalog the extensive library at Hampton Hill, a mansion in a remote area near Syracuse. Locals aren’t too keen on the house’s new owner, the reclusive Captain Ralf Hampton. Something is off about him, his fickle personality, and his entire situation, but Jane can’t help falling in love.

“You just be sure he’s not a wicked man with a key to your door.”

The first half of the book was a little slow, and I did not understand Jane’s insta-love for Ralf, considering she felt threatened by his abusive temperament much of the time. By the second half, the pacing picked up as Jane set out to uncover the mysteries of Hampton Hill and the creepy family vault in the cemetery. I enjoyed the twists and a bit of Civil War history woven into the story, plus, how wonderful that Jane is a librarian. Rating: Good.

GHOSTWIND was originally published in 1966 by Paperback Library. Rachel Ann Payne is a pen name used by John Jakes. — 𝓓𝓲𝓪𝓷𝓪

Very good! DO EVIL IN RETURN is a mystery/domestic suspense novel first published in 1950. It was considered controversial at the time because the victim in this case is a young woman seeking an abortion (which would be illegal for another two decades in the United States).

Protagonist Dr. Charlotte Keating is torn — she wants to help Violet but doesn’t want to break the law. Violet runs away in frustration, but later Charlotte tries to track her down to see if there’s some way to improve her circumstances. Unfortunately it’s too late for Violet, and Charlotte’s interference puts her career and safety in jeopardy.

The mystery was twisty and surprising. I thought I had it figured out, but no! Some of the language and attitudes are dated, of course, but I thought that Charlotte was a compelling heroine. — 𝓓𝓲𝓪𝓷𝓪

📚 Find DO EVIL IN RETURN on Goodreads 📚

PASSION AND HATE,
JEALOUSY AND VENGEANCE,
WERE HIDDEN BEHIND THE GREAT WALLED ESTATE OF MENLO…

It was August again, and Gloria was returning to Menlo. Gloria, with her stunning beauty and vast wealth, who hungered for everything that belonged to Lucy – even Lucy’s husband. Lucy could only wait in dread of what menace Gloria would unleash in this place of haunting beauty and mounting terror – of what evil she would bring to Lucy’s life and to the man Lucy loved and knew she could not hold.

“It was August again. And as always in August tempers are frayed, nerve ends laid bare by the heat.”

ALWAYS IN AUGUST is a Gothic Romance originally published in 1961. The story seems to take place around the time it was written, probably late 1950s, in the small coastal town of Royal Bay, South Carolina.

Lucy and Gloria were childhood friends, for a while. Gloria grew into a fiery and gorgeous young woman, while Lucy, though lovely, was level-headed and down to earth. Lucy had also been lifelong friends with the heir to Menlo Estate, a boy named Stark.

It was thought by all that Lucy and Stark would marry, until ruthless Gloria set her sights on him, and she always got what she wanted, especially if it was Lucy’s first. After tragedy strikes and Gloria flees Royal Bay, Lucy falls in love with another.

“The bad things always happen in August. Whatever potential evil sleeps here, beneath the easy, gentle surface of our days, is nourished, brought to fruit in the heavy, fetid August air.”

So, in August, years later, Gloria returns to Menlo, this time with the intention of stealing Lucy’s husband. But Lucy knows the tragic secrets hidden within the grand estate, and she’s not giving up without a fight.

I loved this book. The characters were well-crafted and memorable. Gloria was the perfect devious villain, while Lucy was easy to empathize with. You may or may not agree with her decisions, but I believe she did what she thought was best. The blurb makes the book sound so scary (menace! terror! evil!), but in reality ALWAYS IN AUGUST is a dramatic & gripping domestic suspense.

I read the 99¢ Kindle edition, which unfortunately is full of typos. I’m going to keep an eye out for an old paperback copy to add to my collection. (And, yay! I finished this review on the last day of August.)

Welcome! I’m a Gen X book blogger reading a little bit of everything — adult, YA, and middle grade.

💀🍂 We woke up to temps in the 50s & sunshine — perfect weather for the last day of summer.
🧤MRS. MARCH | Virginia Feito
🔮 New pillow from Michael’s! I love their Halloween merch this year. Lots of skeletons & fortune telling. Ginger likes.
🔪NOT A HAPPY FAMILY | Shari Lapena🔪 One-Sentence Summary: When a wealthy couple is murdered, fingers point to their adult children who stand to inherit millions.